We are experiencing a few technical difficulties which is affecting our ability to update our website fully. Please bear with us and hopefully this will resolved shortly. In the meantime, please check out our Facebook page, Wellington Embroiderers’ Guild, which is updated regularly. Thanks.

We will be attending the Makers Faire this Sunday, 20th October, at Shed 6 on the waterfront. It is an opportunity to let kids get in touch with their creative side. If you can think of an art or craft, it is most likely to be represented there (even ones you may not have even heard of). So come along and support us, and introduce your younger family members to needlecraft, a skill that will always be useful, whether it be sewing a button on, learning to make clothes or creatively, such as embroidery, or quilting 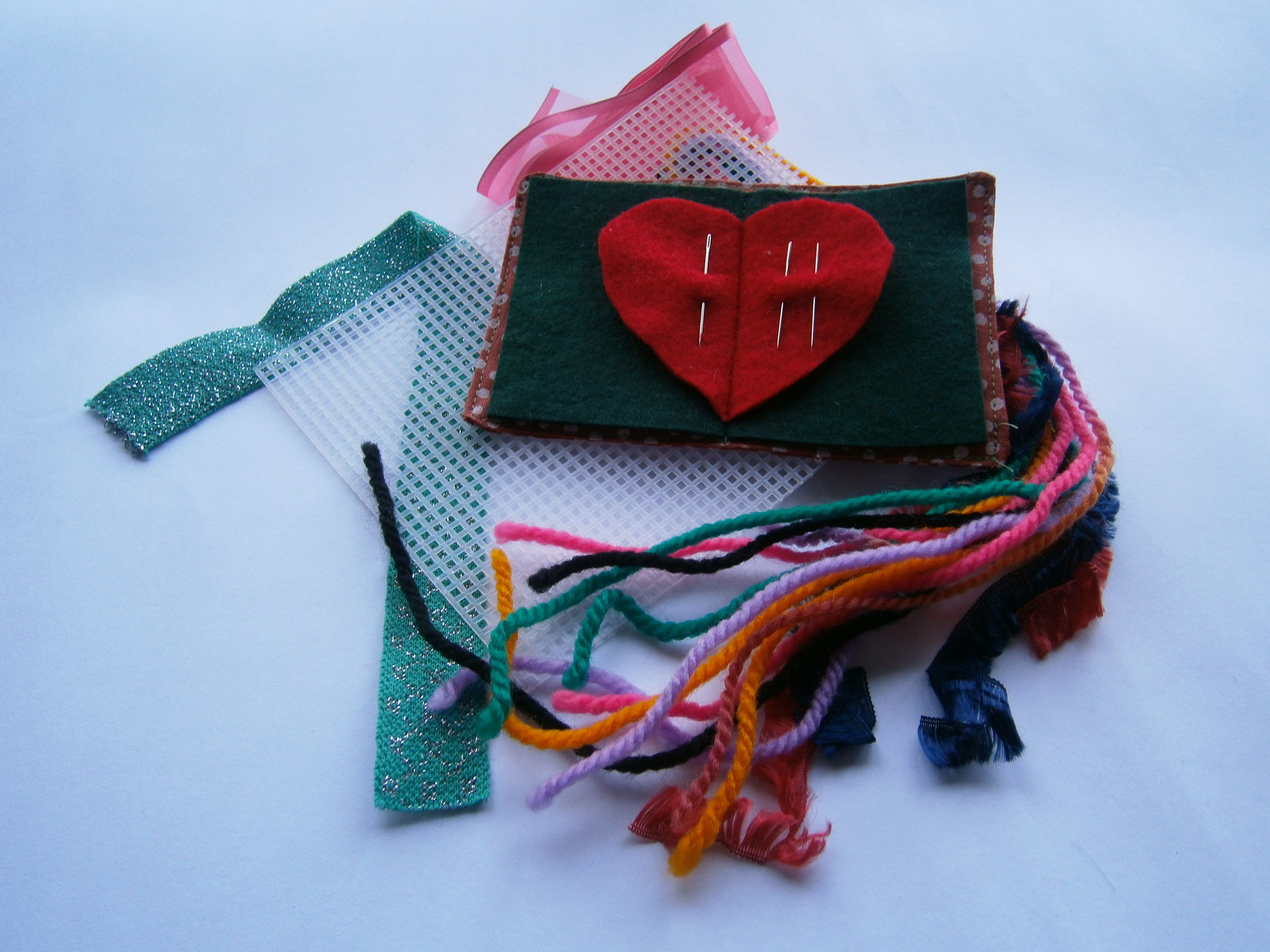 We are currently trialling a new social Stitch-In which will be held on the first Saturday of the month at the Wellington Museum, 3 Jervois Quay (The former City and Sea Museum) between 10am and 4pm.  Come along anytime and catch up with other stitchy minded people, or if you arrive during a lull, enjoy some quiet time to stitch.  Tea and coffee  complimentary.

It doesn’t matter what form of needlecraft you are doing, or what skill level you are,  or whether you are a guild member or not, come along  we would love You to join us.

Click on the Chain Stitch button for a review of our recent class with Amy Baker, ‘Just Mossing Around’

Tuesday 30 July is World Embroidery Day.   The idea first began in Sweden in 2011, when a local embroiderers’ group decided that the creative medium deserved of embroidery its own day of celebration, there is even a manifesto which highlights the positive aspects of the craft!

Some photos from a very enjoyable day.

Sharing ideas or catching up on the latest news

All were welcome to come and join in. Looks like we had a very attentive pupil 😀

The amazing array of classes you can choose from, but be quick, as class sizes are limited and need to be booked asap so you don’t miss out.  You can also, if you prefer, bring along any piece you are currently working on and spend a weekend with like-minded people stitching, chatting and swapping tips etc.  To book classes please see information page (3rd image). 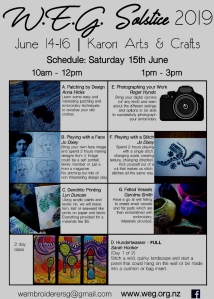 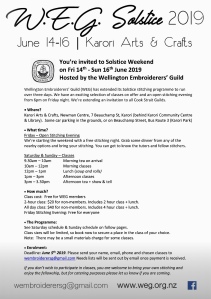 We weill be welcoming Victoria Villasana as our guest speaker this month who will be running a Stitch Bomb workshop.  All are welcome to attend, begins at 7.30pm Loaves and Fishes Hall, St Paul’s Cathedral, Hill Street, Wellington.

It’s membership renewal time. Either complete the form you have received via email or access the form here under the membership button and bring along to our May meeting on Wednesday 8th or post it to PO Box 3585, Wellington, 6140.

information about Solstice Stitching (June 15 &16) can be found under the newsletter button. Have a look and book your classes now so you don’t miss out!

10 June 1947 – 16 December 2018
Cathie began City and Guilds under Helen Marshall at Newlands College in 1983 and it was about then that she joined the Wellington Embroiderers’ Guild. Her C&G graduating class exhibited as The Gentle Art Company during the 1988 International Festival of the Arts and on other occasions at Turnbull House and in other parts of New Zealand. Subsequently she and fellow C&G students Louise Day and Kerry Barber formed Gentle Art Works. Together they designed and sold various cushion patterns, and they also designed kitsets based on the Globe hangings for Ruth-Mary Beach’s Strand Wools.
Cathie held positions on the Guild Committee at various times,
including President in 1991-92 and she was ANZEG Cook Strait Regional Rep in 1993-95. She was also an active participant in the Central Extensions group.
Cathie trained as a Primary School Teacher in Wellington and she was passionate about teaching a wide range of embroidery techniques. She will be remembered especially for her enthusiasm for canvas work and her renowned No Sag Bag. In fact she credited canvas work as playing a big part in her recovery from a brain aneurysm 25 years ago.
Cathie taught many embroidery classes locally and organised stitching groups at Alicetown Community House and later at Moera Community House from which she encouraged people to join the Guild. She always showed empathy and great generosity and support to anyone doing a stitching project.
Cathie had a wide range of other interests. She was involved with Chamber Music, Choir and the Horticultural Society. She loved gardening and hosted a number of “WWOOFers” (Willing Workers On Organic Farms) at her Lower Hutt home giving them a city experience.
It was after attending Conference in Nelson in July last year that she was diagnosed with cancer. Courageous and cheerful until the end, Cathie will be very much missed by her children and grandchildren and all who knew her. 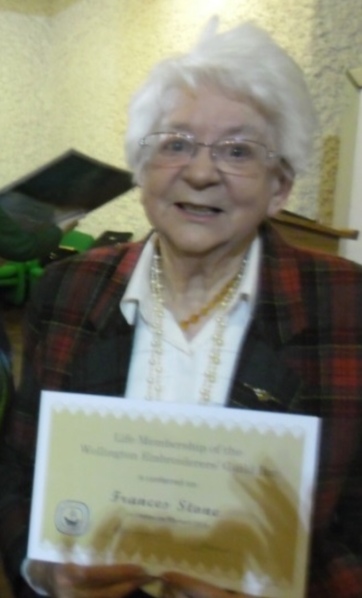 Frances was a foundation member of the Wellington Embroiderers’ Guild, which started 16 June 1966. She was an outstanding and dedicated member right from the beginning, a dedicated textile artist providing help and guidance to many.
Before the Guild started she was a member of the Cathedral Linen Guild and an enthusiastic member of Betty Logan’s classes at Wellington High School, from which she enticed a number of people to join the Guild.
During her 52 years as a member of the Guild she was president twice, in 1996 and in 2012/2013. She served on the committee a number of times starting from 1969 and was the newsletter editor from 1975 to 1977. Life membership of the Guild was conferred on 9th April 2014.
Frances joined most groups that the Guild organises, for example the museum group, and taught a variety of classes. She was a speaker at guild at least once every ten years.
Frances was a member of the Wednesday Night Group, which
met for twenty years starting from the late 1970’s and this group made some beautiful items including quilts. Frances and the group were instrumental in making
a quilt for the Wellington Town Hall in 1984, based on the design of the floor tiles in the Town Hall. Frances managed to achieve all of this while running her own business, teaching music and bringing up a family.
Although Frances had been unwell for some time she still managed to attend meetings occasionally and even some Regional Workdays.
Our thoughts are with Harry and the family. LD